The two people being held are Turkish nationals 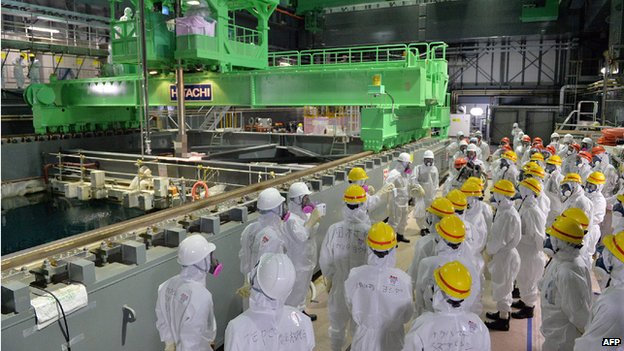 Tepco has been employing about 6,000 workers a day to decommission the Fukushima nuclear plant

They claim the compensation for removing contaminated debris and patrolling the plant has been inadequate given the risks involved.

It is the first time Tepco has faced legal action from Fukushima workers over pay and working conditions.

The BBC’s Rupert Wingfield-Hayes says if they win, it could set a precedent for thousands of other workers to come forward.

The lawsuit was filed by two current and two former workers at Fukushima.

“My health may be harmed some day,” one of the workers was quoted as telling Japanese broadcaster NHK. “I believe there are many people who can’t speak out about this kind of problem.

“I may get fired or may be given no further work. But I hope people will take this as an opportunity to speak up and get paid.”

The Fukushima Daiichi nuclear reactors went into meltdown after a massive earthquake and tsunami in March 2011 knocked out reactor cooling systems at the plant.

Subsequent radiation leaks made the surrounding areas around the plant unfit for habitation.

Tens of thousands of people had to leave their homes and businesses because of radioactive contamination, with the majority still unable to return home.

The facility is operated by Tepco, which has spent billions of dollars on the clean-up and decommissioning of the plant.

About 6,000 people have been working at the plant daily over the last two months, and the lawsuit is demanding that they either be paid directly by Tepco or the government.

However, many are employed by contractors and subcontractors.

Our correspondent says that there have long been complaints that many subcontractors are not paying their workers properly, and allegations that some are connected to Japan’s Yakuza crime gangs.

The lawsuit claims that the subcontractors profit from the funds allocated for the decommissioning at the expense of worker wages.

The lawyer co-ordinating the case on behalf of the Fukushima workers said at least two more people were expected to join the lawsuit.

Last month another court ordered Tepco to pay damages to the family of an evacuee, Hamako Watanabe, who killed herself after she was forced to leave her home because of radioactive contamination.