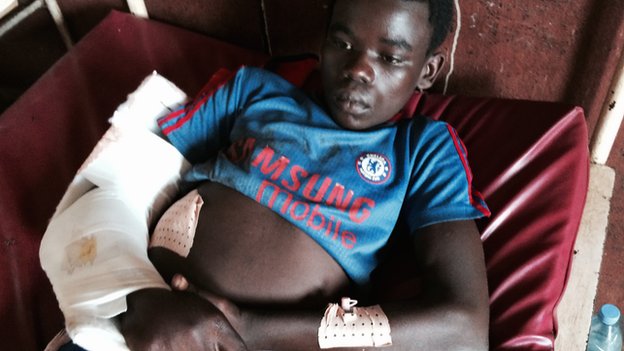 A boy being treated at the University Hospital in Bambari, CAR

Francoise Gerizapa scrunched her face into a fierce pout and then screamed once more a chilling, sing song whoop that filled the dark, crowded ward at Bambari’s hospital in the Central African Republic (CAR).

Bambari is CAR’s second city, but it is as underwhelming as the narrow dirt track that leads to it.

Crumbling old colonial buildings peer out from the shade of tall trees; a few scraps of tarmac cling together in the dust.

Dr Bama a tall, dignified man born and raised in Bambari, where his father was a doctor before him said the security situation had deteriorated abruptly last month when 34 people were killed in a single, frenzied day.

Within hours, the entire Christian population had fled to three makeshift camps on the outskirts, while the Muslims retreated into a single neighbourhood in the city centre.

And then the fighting started to spread, like an infection, along the muddy tracks leading deeper into the surrounding forest.

It seems to be a mixture of banditry, reprisals, intimidation and more organised military raids.

They brought three soldiers in last night  ex Seleka ambushed on the road, said Dr Bama, referring to the mainly Muslim fighters who briefly seized power across CAR, but have since withdrawn to await the outcome of peace negotiations.

They are a more organised force than the loose coalition of mostly Christian anti balaka militias active in the countryside around Bambari.

Their colleagues stood around us as we cleaned their wounds.

It is not safe here at the hospital. Sometimes we are threatened when we work, said Dr Bama, who described working late into the night during a ferocious rainstorm.

Hours earlier, two brothers had been attacked on the nearby road and their throats slit in broad daylight.

One was brought, still alive, to the hospital.

We fought to save him, but he needed blood, and we have no supplies here, said Dr Bama.

When possible, the most serious casualties are sent by air or road to the capital, Bangui.

Aid agencies like Medecins Sans Frontieres (MSF), Save the Children and the United Nations are working here to support Dr Bama and his colleagues and to provide for a population struggling without the most basic state services.

Dr Bama took off his white coat and sat down in his small office to catch his breath between rounds.

There’s no political authority here in Bambari. But this country still exists.

We have a president to bring peace back. And we have hope, said Dr Bama.

The problem is isolated people who understand nothing and who sow terror.

If only they could appreciate the state we are in.

We hear reports that they plan to attack our hospital. I don’t understand why. This is where we treat everyone,” the doctor said.